River Flowing Under A Hospital

Standing at the Fleischbridge in Nürnberg’s old town, I was fascinated with this building. Water runs underneath, falling pelargonias adorn the red-paned windows and its color of brown bricks – my kind of a scene from a story written by one of my favorite authors.

Interestingly, this building is the hospice of the Holy Ghost, yep, a hospital situated at the River Pegnitz. It is in itself historic, founded in 1332 and is one of the largest hospitals of the Middle Ages.

On those times we visited Nürnberg, coming by this river is a must….not just for sightseeing but feeding the ducks. Teehee…kids love feeding them and most of the time mom-in-law has stale bread that we can bring… 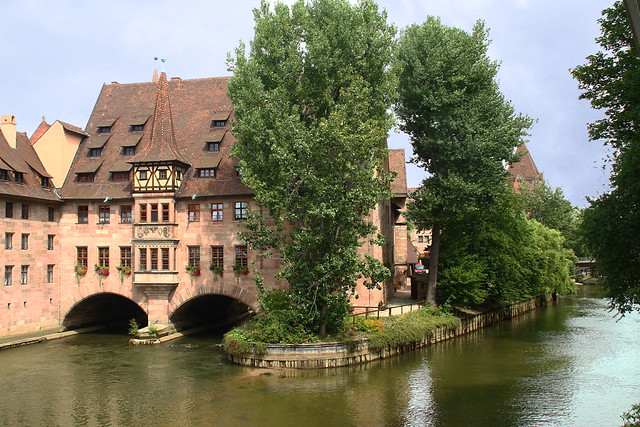 Nuremberg certainly has a lot of bridges within. Understandably so since it is situated on the Pegnitz river and the Rhine–Main–Danube Canal, the former flowing through the city center. They may not be as many as the bridges of Venice but they add charm to historical Nuremberg’s appeal.

Coming from the Fleischbrücke’s other side we moved to the left on that supposedly summer day, here’s what I saw – a restaurant terrace by the riverside overflowing with pelargonias. Parasols paraded too and went accordingly with the flowers’ color. 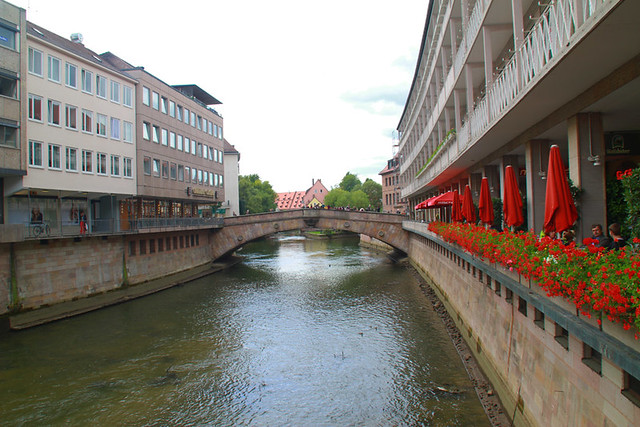 Looking beyond the terrace you’ll see another bridge which I don’t know the name of…this one is crowded too but without the vendors…on our side were souvenir carts of different sorts. There, on their side, were just people passing by, one or two playfully fetching water with a pail pulling it up and down with a rope. Can’t tell what they’re up to. 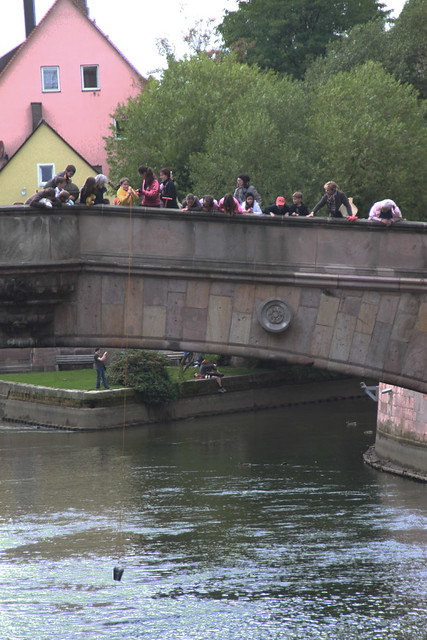 Here is a view of the bridge in whole: 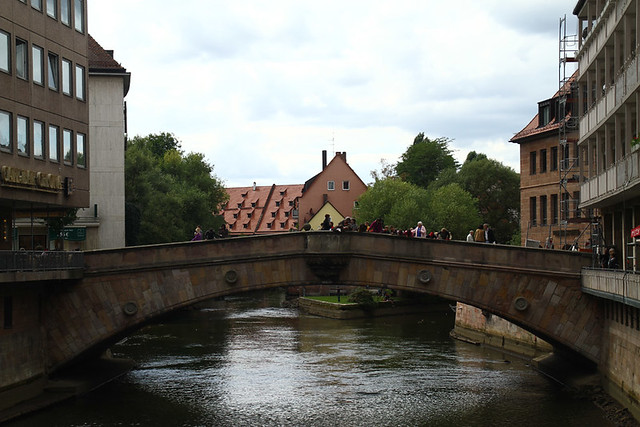 Frauenkirche or Our Lady’s Church 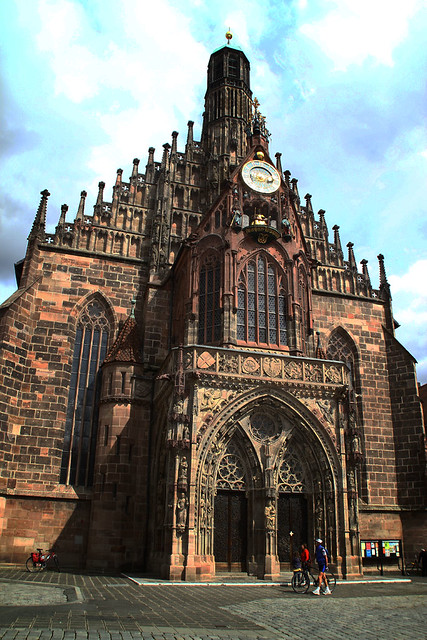 At the eastern side of Nuremberg’s market/main plaza is a beautiful brick gothic church called Frauenkirche or Our Lady’s Church. Looking back at the archives of this blog, here’s one post I did earlier on. I don’t know why but we haven’t been inside this church even before. I assume though that it’s as grand inside.

I would have written a lot more about this architecture but I believe the photos will suffice. ^_^ 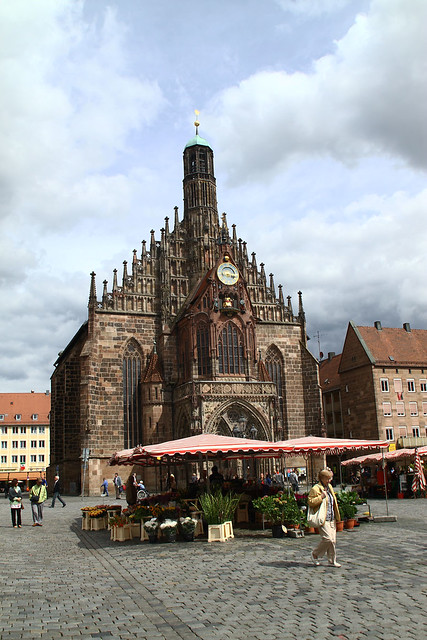 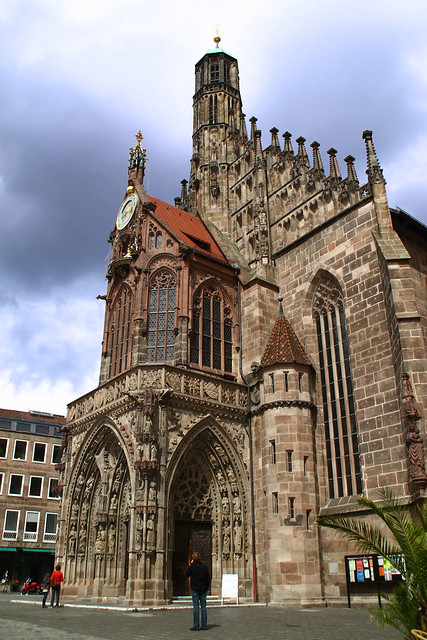 Nuremberg is one of the ideal city for Religious Heritage, Pilgrimage Tour, and Church Choir Tour programs for church groups.Aside from Our Lady’s Church, there’s St. Sebaldus Church (St. Sebald, Sebalduskirche), one of the most important churches of the city, and also one of the oldest. There’s also St. Lorenz Church (Lorenzkirche), another church of Gothic architecture. 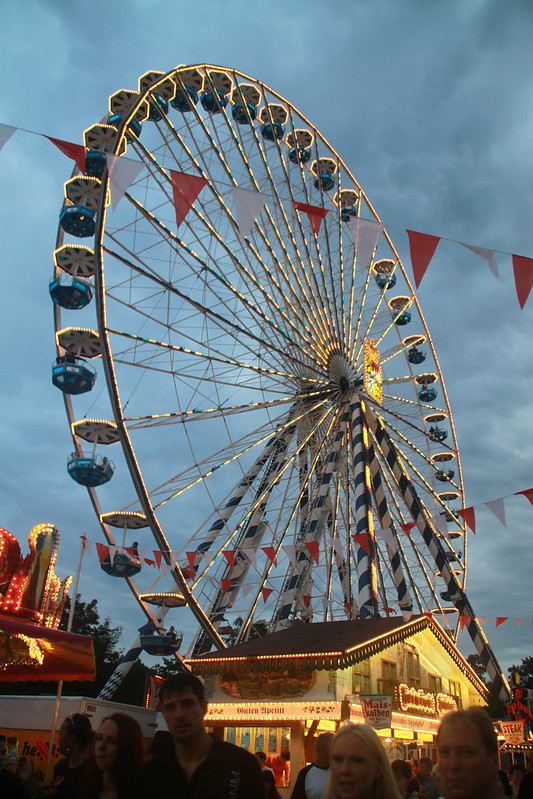 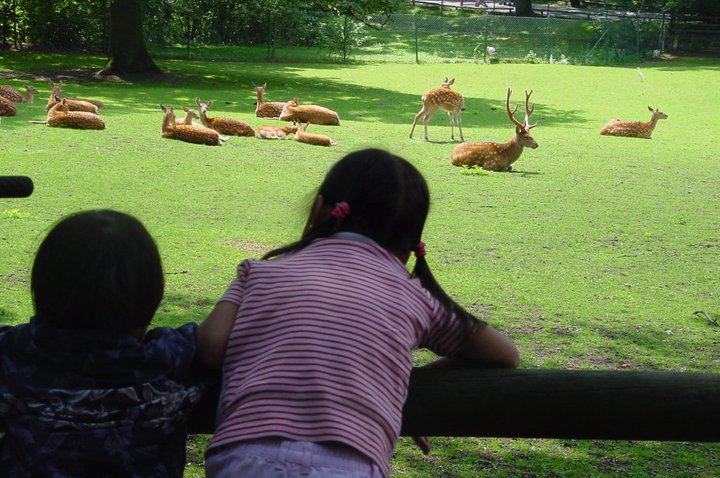 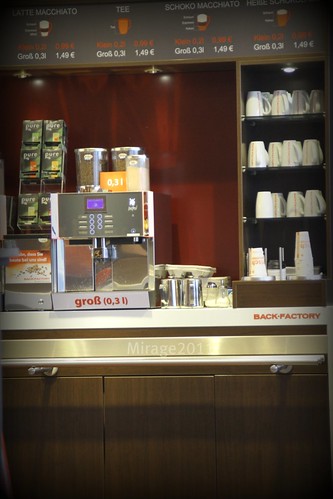